Is Whale halal or haram?

For some Muslims, the Whale is halal, while it is viewed as haram for others. And this difference is a result of the classification given to the term “Fish” in Islam and whether or not the Whale meets that classification. Even to this day, there is a difference of opinion amongst contemporary Islamic scholars. 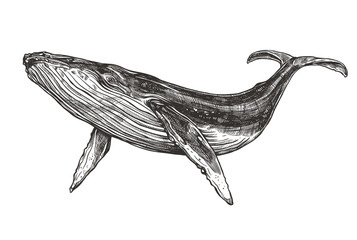 What Does The Ḥadīth Of The Conquest Say About Whales?

Many Muslims who believe Whales are halal draw beliefs from the interpretations of the Hadith of conquest. And although the Hadith did not specifically mention the creature in it to be a Whale, many scholars have drawn up interpretations based on the description written therein. Here is what the Hadith says:

“We set out in the army of al-Khabaṭ and Abū’ Ubaydah was made the commander, [and] we were struck with incredible hunger when [suddenly] the water threw a large dead fish. We had not seen anything like it, it was called al-‘Anbar. We ate from it for half a month”

He then goes on further to state that:

“Thus when we came to Madīnah, we mentioned this [incident] to the Prophet Ṣallallāhu ‘Alayhi Wasallam, and so he said, ‘Eat, for it is the sustenance that Allah has extracted for you, and feed us if you have some [of it] with you, so some of them gave it to him and he ate from it”

In addition to the hadith above, many believe it is permissible to eat the ‘Anbar fish. ‘Allāmah Hāshim al-Tatawī al-Ḥanafī Raḥimahullah (d.1174 AH) writes in his Fākihatul Bustān:

“When the ruling for all the creatures of the sea according to the Ḥanafīs is that it is not halāl to eat anything from them except fish, we shall suffice with mentioning only a few types of fish…from amongst them is a type called al-‘Anbar, this is the fish that has been mentioned in the authentic narration in the Ḥadīth of the conquest.”

‘Anbar has been classified as a large fish. However, contemporary scholars have a difference of opinion over whether the word ‘Anbar’ refers to a whale.

Some have held the opinion that it refers to a whale.

“Al-‘Anbar is a fish that exists in large seas, its height is fifty hand spans, it is called Bāl (whale)”

“‘Anbar and Bāl are synonymous or ‘Anbar is a type of Bāl, Bāl and Whale are synonymous and are named for one animal. Therefore, there is no doubt in a whale being halāl.”

“‘Al-Anbar – it is the fish known as al-Bāl or Whale in today’s times.”

Islamic schools and their stance on Whales

Muslim schools of thought have different opinions regarding whales’ halal or haram status. Here are some of their views:

Sunni Muslims are the largest denomination of Islam. Sunni Muslims believe that the first four caliphs correctly interpreted Islam as written down in the Quran and Hadith.

There is no fixed list of what sea animals should be considered halal or haram. Still, generally, these schools hold as a general rule that all “sea game” (animals of the sea) are permissible to eat, with a few exceptions.

For instance, in the Shafi’i Sunni Muslim majority nations of Indonesia and Malaysia, a local dish called Laksa which includes meats such as shrimp and squid with a soup base made from shrimp paste is permissible. They also believe Whales are halal for Muslims.

Hanafi school of thought is one of the four primary Sunni schools of religious law (fiqh) within Sunni Islam, which holds a large population of Sunni Muslims. Scholars of this jurisprudence believe that only “fish,” as opposed to all “sea game,” are permissible. They further think that other sea creatures that are not fish are makrooh regardless of how they breathe. This means Whales are not permissible.

The Shia Muslims’ thoughts on the issue of halal and haram regarding whales are slightly different than that of Sunnis. The majority opinion among Shia scholars teaches that it is permissible to eat fish with scales but haram to consume any other aquatic animals, except certain edible marine crustaceans.

This puts the Whale out of the halal list and unto the haram list for any Muslim belonging to the Shia group. Any animal with fins and scales is considered halal by most Shiite scholars. At the same time, all other types of sea creatures are deemed haram.

Shias believe that certain aquatic animals like dolphins and whales should be deemed impermissible because they live in water and don’t have any unique characteristics that make them clean or unclean animals by Islamic food laws.

Is Whale Fish Or Meat?

Many believe since Whales live in the ocean, they must be a type of fish. The truth, however, is that whales are not fish; they are marine mammals. Here are the reasons:

And since whales are mammals and not fish, their meat is halal or haram for Muslims, depending on whether or not it meets all the requirements for your belief.

The whale fish or meat is halal, and Muslims can eat it. It is believed to be the animal mentioned in the Hadith of conquest. And as such, many Muslim schools of thought have pronounced them halal. That said, if you are unsure or belong to a differing school of view, it’s best to avoid them.